Being compelled to share GREAT music is how Drumzofthesouth began; -then, posting photos and words about music that was getting right into my system led me to organise events at Brixton’s Plan B, a tent at Antic Banquet festival and many, many events in and outside of Crystal Palace’s Antenna Studios. I am now taking up the baton from Katherine & Charlie Hannah (Itchy Teeth) and organising the next Live from Alexandra Nurseries event on the 28th of November.

Tickets are available from the nurseries shop or here: http://drumzofthesouth.bigcartel.com/product/live-from-alexandra-nurseries-e-ticket .

View this collection of photos as a slideshow: 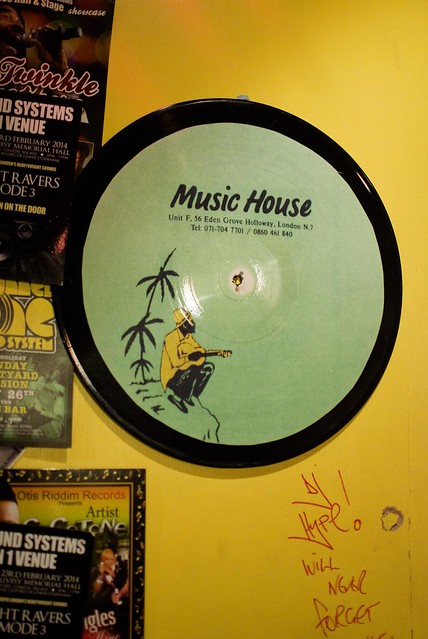 or as single images on Tumblr.

Documentaries that I contributed to:

London ‘On a Regular’ from Rollo Jackson on Vimeo.

Of the pre 2014, there was lots of CAN, lots of PJ Harvey, some Leonard Cohen and loads of King Krule. There’s something kinda ugly about his voice, which is what I like about it.
I was also, blessed with an introduction to Bwiti music this year.

Breezy’s parents punk band Lost In Space were a repeat prescription in 2014 and it felt so right to play alongside them at a gig with my own band (our third ever). They’re all 50+ and I can honestly say they kick it harder than many bands 20 years younger than them. Raw, honest energy with the most genuine PUNK spirit I’ve ever felt.

Kate Tempest’s launch of her new album Everybody Down at Brixton’s Hootenanny was also full of energy. It was beautiful watching her look so overwhelmed and surprised by the amount of people that had turned out to see her and her band, in a local haunt that she’s played on a number of occasions to far smaller crowds.

Hosting a couple of Oliver Sudden’s Vintage Fly night’s at Antenna Studios Cafe was great fun. I heard some great tunes and met some brilliant people at both of them, such as Hark1karan Gill, who runs this ultra fresh, positive culture website of the same name.

Other great music documentaries or films, included Tim & Barry’s feature length “I’m Tryna Tell Ya” (about Footwork), Rollo Jackson’s “Slimzee’s Goin On Terrible” and docs that I contributed images to including Mikhail Mehra’s “Skream- Come With Me,” Mala’s “John Peel’s Record Box” and another Rollo Jackson production “London On a Regular.” The last three are very poignant at this very moment, as they all mention Forward>> which happened at the club Plastic People, which as announced this week, is set to close, forever.